If you’re worried you’ve got some laced weed, you’ve come to the right place. Hopefully, you’re not experiencing any laced weed symptoms. If you are, it could be time to seek medical attention. But that’s the paradox about laced weed: it’s difficult to tell if weed is laced if you haven’t used it. If you have used it, of course, it’s easy to tell — because you’re probably really messed up. So before it gets to that point, here’s how to know if your weed is laced.

How To Tell If Your Cannabis Is Laced with Other Drugs

If you have laced weed, it was probably laced in one of two ways. Either substances were sprinkled into weed that’s already ground up and probably wrapped, or a joint or blunt was dipped in a liquid form of a drug or chemical mix. Hence, that “wet”.

Weed can be laced with harder drugs like cocaine, PCP, heroin, and acid. And aside from hard drugs, cannabis can be laced with other nasty stuff. Embalming fluid (formaldehyde), laundry soap, insecticide, even glass have all ended up in cannabis, either to try to increase its potency, its weight or its appearance.

Here’s how to tell if your weed is laced with any of this stuff.

How To Know If Your Weed Is Laced With Cocaine

Cocaine is a white powder with the texture of powdered sugar. It usually smells faintly of the chemical solvent used to extract the drug from the coca plant. The taste is metallic and bitter, but smoking it will numb your mouth to the sensations pretty quickly.

Unlaced weed should only drop a few white crystals (trichomes) from its buds. If more powder than that is observable, you could have cocaine in your weed.

Cocaine-laced weed might sound like a fun way to lace cannabis, but it’s super bad for you. Smoking cannabis laced with cocaine is very dangerous for your heart, lungs, and brain.

Symptoms include intense heart pounding and shallow breathing that could lead to a heart attack or stroke. You’ll also feel numb, paranoid, extremely agitated and high-energy.

How To Know If Your Weed Is Laced With PCP (Angel Dust).

Angel dust is similar in appearance to cocaine, but it has a very distinctive, harsh chemical taste.

To know if your weed is laced with Angel dust (a.k.a. PCP), examine it the same way you would for cocaine. Look for too much white powder on the outside of the buds.

Unfortunately, PCP can also be dissolved in a liquid that you can dip a joint into. When the joint dries, it will leave behind white crystals, but they may be harder to detect.
PCP Laced Weed Symptoms.

If you’ve smoked weed laced with PCP, you’ll know it without a doubt. PCP is a powerful hallucinogen, and it will quickly detach you from reality. Look for severe disorientation, numbness, slurred speech and completely erratic urges and behaviors.

Be sure to seek medical attention immediately if you suspect you’ve smoked weed laced with PCP.

How To Tell If Weed Is Laced With Acid.

Another cannabis cocktail involves combing LSD and cannabis. Detecting acid in your weed, however, is a completely different matter.

But that’s not how people lace weed with acid. Instead, the process involves dosing the mouth tip of a joint or pre-roll with acid. When you smoke the wrap, your mouth absorbs the LSD, and away you go.

Acid and weed combine to produce a powerful, hallucinatory high. You’ll also experience some impaired coordination. You’re in for a serious trip.

If that trip turns bad, you’ll start to experience paranoia and anxiety, which a cannabis high can sometimes exacerbate. But at least you won’t have to worry about dying from LSD-laced weed.

How To Know If Your Weed Is Laced With Dangerous Additives.

Sometimes, weed isn’t laced with hard drugs, but with dangerous chemical adulterants. These can include things like soap, formaldehyde, fuel, glass or even bug spray.

You can use what you already know about those substances to detect them in your weed. You might lose some bud in the process, but if you’re worried it’s laced with this stuff, it’s definitely worth it.

How To Tell If Weed Is Laced With Glass.

For weed you suspect is laced with glass to make it look like it has more resinous trichomes, take out a bud and a CD you don’t care about. Rub the bud against the CD. If there’s glass in your weed, it will make unmistakable scratches on the CD’s surface.

If you’ve never heard of CDs, or don’t have any, any soft, smooth plastic will do.

How To Know If Your Weed Is Laced With Detergent.

Soap suds up. So drop a bud into a small amount of water and swish it around. If bubbles or a soapy film appear in the water, you’ve got bad tree.

How To Tell If Weed Is Laced With Solvents or Other Chemicals.

Formaldehyde, fuel, and other chemical additives are usually flammable. To see if your weed has been laced with these substances, hold a bud over a flame and watch what happens.

If it flashes up, sparks, pops or behaves unlike normal weed, throw it out along with the rest of the batch.

In general, if you’ve smoked laced weed, you’re going to have an experience that doesn’t resemble a typical high produced by high quality, unadulterated cannabis.

So look for things that don’t usually happen when you use cannabis. Excessive energy or agitation. Weird mood swings. Problems with breathing or with your heart rate. Dizziness and lack of coordination. Vomiting, diarrhea and other gastrointestinal distress.

Consider Getting a Drug Testing Kit.

If you’re really concerned about laced weed, the best thing to do would be to find a new source for your cannabis.

Try to buy from someone you trust or talk to someone who has procured cannabis from a source without issue multiple times.

Sometimes, however, especially after a bad experience, you might want to know exactly what kind of drug your weed was laced with. In that case, it makes sense to use a drug testing kit.

Home drug testing kits can be bought at affordable prices from many pharmacies and online retailers.

Hopefully, you’ll never have to worry about laced weed or how to tell if weed is laced. As cannabis becomes more mainstream, legal and regulated, products will become safer and more consistent. 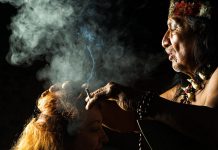 The Scientific Reason People In Crisis Benefit from Ayahuasca 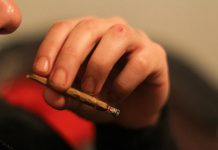 What is Laced Weed? Is it Dangerous? 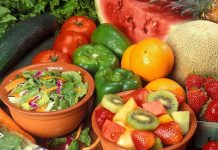